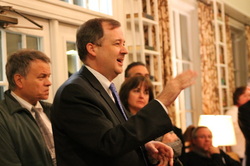 The Norcross High School Foundation of Excellence gathered for its Winter Celebration on Wednesday at the Neely Farm clubhouse which was open to the community.

The gathering included the foundation’s board members, school teachers, coaches, a former and the present school principal and parents who have children attending the high school.

The Foundation, which was founded in 2001, was created by forwarding thinking parents and supporters who wanted to find ways to provide funds each year to enhance the school’s academic and athletic programs.

At the gathering, and still basking in the school’s first state football championship, Coach Keith Maloof talked about the school and the foundation’s impact on the school.

“The foundation is unbelievable for our community,” said Maloof who has been at NHS for 14 years. “It’s not just about winning a state championship, we are special because of the support of the foundation, the community and the teachers.

“We are winning state championships every day in the classroom,” he said. “It’s not to say we don’t have our problems, we do. But we conquer our problems and we move on.”

Also on hand for the evening was Jay Nebel, who has been named Gwinnett County’s Teacher of the Year. Nebel is also the assistant coach for the Lady Blue Devils basketball team who won this year’s state championship title.

“I’m so blessed to be at Norcross High School,” said Nebel, who also teaches Social Studies. “Coaches teach too and it’s wonderful to have the chance to impact the lives of the students in a positive way.”

The foundation is working on plans for its 2013 Spring Gala, its largest fund-raising event which will be held April 26. Last year the foundation was able to raise nearly $100,000 for the school. Monies have been used to support the school both athletically and academically.

One of its new programs, introduced in the current school year is “After School Matters,” an after-school program to help academically challenged students to get additional help outside of the classroom so they can remain on track to graduate.

“These are kids that don’t have the resources or are not engaged in school,” said Saunders, “so we launched this program with Mr. Bishop (Norcross HS Principal).

Currently the foundation’s donations are helping to support 55 high schoolers who are in jeopardy of failing one or more classes. “If kids can get through the 9th grade, then the odds improve dramatically that they will graduate,” said Bishop.

Aaron Lupuloff, the foundation’s vice president, pointed out that it is the strong support by the community that is the key to a successful school.

“This community takes supporting the school seriously,” he said. “Our kids spend more time at school then at home and the foundation supports the teachers so we can keep the best and brightest teachers.”

The NHS foundation is a 501(c)(3) organization, visit the foundation’s website to make a donation or to learn more.

Want to stay up to date on everything the Foundation is doing? List your email below to subscribe.
Game bài đổi thưởng